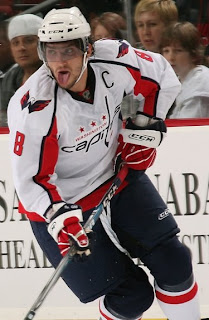 With the coaching change for the Washington Capitals, Bruce Boudreau out and Dale Hunter in, a lot of things will change as this team struggles to find identity. Lately there has been a lot of talk lately of Alex Ovechkin's under performance over the past two years as a part of the Caps' failures. Some draw that under-achievement to the C that rests on the wingers left shoulder. In some ways, I believe that to be true.

The expectation level for the one of the league's most captivating forwards in the modern NHL has been an awful burden on the 26 year old. Ovechkin not only puts the pressure of a NHL team that was picked by some to win the Cup this year, but of his country's duties and the up coming Olympics in Sochi in 2014. The pressure Ovi puts on himself to win a gold medal and win the Stanley Cup, not to mention be the leader of his team, seems be too much to bear. I do think that it is affecting his play on the ice night in and night out.

Let's be clear, this is Ovechkin's team. It was built around him from the moment the Caps picked him in 2004. Nick Backstrom was brought in to support him, the Caps have drafted grinders to help his line produce and the young guns are all centered around Ovechkin. It was the logical choice to make him captain when Chris Clark was traded to Columbus leaving the office open. At first Ovechkin reveled in the spotlight. But of late, it seems to be more of a hindrance than an asset.

With the changes the Caps have made behind the bench, maybe one of the first duties is to get Ovechkin back into his predator-like offensive mode. One of the ways to do that is just let him be a player. Not a captain, not a country's only hope for a gold medal, not a city's savior for the Cup, just a player. Just let him play.

Just let him play, when Ovechkin isn't worried about how badly his team needs him make the perfect play, the Capitals win. He is better when he is getting 40 shots a game and playing for the fun of it, rather than treating the game like a job where all eyes are bearing down on him. He relished in rivalries, was spectacular for the cameras on HNIC, he played best when he just played the game.

Does that mean stripping him of the C? That locker room the Capitals have is full of leaders that don't wear a letter on their shoulder. Ovi doesn't need that C to be great, he doesn't need the responsibility of taking ownership of the teams failures either. He just needs to play the game. If that means stripping the C to make a point, I wouldn't be all that surprised.
Thought up by Garrett at 10:05 AM

Email ThisBlogThis!Share to TwitterShare to FacebookShare to Pinterest
I've thought of this before: Boudreau, Dale Hunter, Ovechkin