Boudreau Out, Hunter In 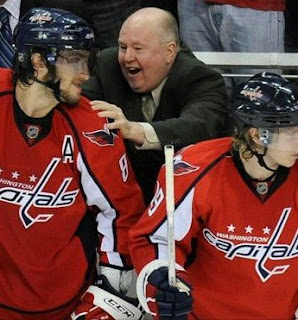 A shocker, but not really. The Washington Capitals fire head coach Bruce Boudreau after what General Manager George McPhee cites as Boudreau's poor performance over "the last few weeks". The Capitals go in a different direction by hiring ex-Caps captain Dale Hunter. Per Caps PR:

Hunter, 51, becomes the 15th coach in Washington Capitals history and will make his debut behind the bench tomorrow as the Capitals host the St. Louis Blues at Verizon Center.

Hunter helped the London Knights of the Ontario Hockey League (OHL) win their first Memorial Cup Championship in 2004-05 and is the fastest head coach in OHL history to record 300 and 400 career wins. The Petrolia, Ont., native owns the highest winning percentage in league history with a record of 451-189-23-24 (.691) in his 11 seasons behind the bench for London and was the 2003-04 winner of the Brian Kilrea Canadian Hockey League (CHL) Coach of the Year.

Hunter is one of just four players to have their numbers retired by the Washington Capitals as his No. 32 was retired by the team on March 11, 2000. Hunter captained the Capitals from the 1994-95 season until the 1998-99 season and was named to the NHL All-Star Team in 1997. He played in 872 games for the Capitals from 1987-99 and compiled 556 points (181 goals, 375 goals) and 2,003 penalty minutes. Hunter ranks first all-time in Capitals’ history in penalty minutes, fourth in games played, tied for ninth in goals and third in assists. His 100 career playoff games with the Capitals rank tied for first in team history while his 72 points and 47 assists both lead the franchise.

This season the Knights lead the OHL with a 20-5-0-1 record and 41 points. Hunter earned his 450th career win on Saturday, Nov. 26 in a 7-2 win over Erie. The Knights are currently the top-ranked team in the CHL and have been ranked No. 1 for seven of the 10 weeks this season and each of the past six weeks (CHL’s Top 10 teams are selected by a panel of National Hockey League scouts).  During his time in London, Hunter has coached current Capitals defensemen John Carlson and Dennis Wideman and has worked with numerous other current NHL players such as Rick Nash, Corey Perry, Patrick Kane and John Tavares.

London has won 50 or more games three times and finished first in the OHL four times under Hunter, including a CHL record-setting season in 2004-05 when the Knights finished with a record of 59-7-2-0 and went 20-2-0-0 in the playoffs on the way to the first Memorial Cup championship in London history. 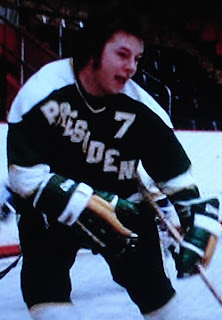 What I will most about Gabby? His glorious hair:
Thought up by Garrett at 9:30 AM

Email ThisBlogThis!Share to TwitterShare to FacebookShare to Pinterest
I've thought of this before: Boudreau, Dale Hunter, McPhee