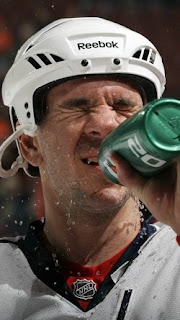 Traded for during the Capitals 8 game losing streak for potential prospect Tomas Fleischmann, Scott Hannan was brought in to bring some muscle to the blue line. He was a band-aid on a beat up blue line with Tom Poti struggling to stay healthy. Hannan had a single goal this season and four assists in 55 games for Washington. Total numbers is 11 points with six more assists with the Avalanche.

Hannan brings some great experience especially in the playoffs with his years spent in both Colorado and San Jose. More of a stay-at-home defenseman, Hannan played consistent enough not to be a liability and in the end for a defenseman that is a good attribute. He became dependable for staying healthy and playing solid on the back end. A big guy at 6-1, 225 lbs., he uses his size efficiently well.

It is unclear if he was just a rental for McPhee for this season. When GMGM pulled this trade, it was relative early. Acquired in November he was there for the long losing streak and played well inside Bruce Boudreau's defense-first system.

Hannan is a solid defenseman that can log the minutes and is very dependable in almost all situations. He is a good compliment for some of the puck moving defensemen the Caps have playing his stay-at-home style. He isn't afraid of a little contact and his long career experience is invaluable.

At $4.5 million, he is a pretty expensive band-aid. With the acquisition of Dennis Wideman at the trade deadline who also happens to make $4.5 million the easy decision is to let him go to greener pastures. Hannan adds really no offensive assets, but his experience will drop his name on a score sheet or two for assists.
Thought up by Garrett at 5:58 AM

Email ThisBlogThis!Share to TwitterShare to FacebookShare to Pinterest
I've thought of this before: Hannan