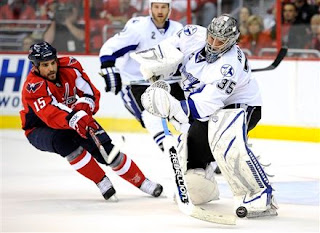 Face offs are so important. It can lead to a great offensive chance or fend off an attack in the defensive zone. The Capitals did away with the league's best face off guy in David Steckel. So Boyd Gordon picked up the reigns and was the Caps go to guy on the face off dot. He proved a useful face off man in the post season. He was first in the league up to the point the Caps were swept by the Tampa Bay Lightning.

Gordon is a great defensive player. However he is far from a two-way player. Through 60 games, he has only tallied three goals and six assists in the regular season. But the Capitals do not need Gordon to score, but to keep winning face offs for them. They might use him for some intimidation tactics because he has quite the mean scowl when he wants to use it.

As long as he is healthy and keeps winning draws, Gordon will always find a spot on the Caps roster.

Gordon proves to be a good defensive player and can hold down the checking line. His face off value is of real importance. The Caps do benefit from winning draws, especially in the offensive zone. His expertise is helpful.

While Gordon's face off percentage makes him valuable he still hasn't cracked the top 30 in the face off list this season. He also has a nagging back injury that seems to conjure up at the wrong time. He has yet to play a full season.

Gordon does not add much in offense either. The best he has done was 29 points in the '06-'07 season. His production has slipped each year since his career best season.
Thought up by Garrett at 5:39 AM

Email ThisBlogThis!Share to TwitterShare to FacebookShare to Pinterest
I've thought of this before: Gordon