Something New In The Old

Who says the Capitals don't have tradition... 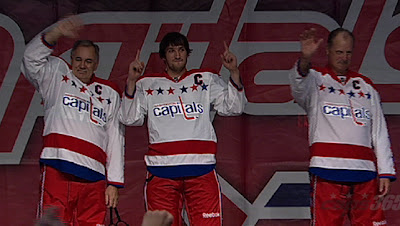 The Capitals unveiled their uniforms for the Winter Classic versus the Pittsburgh Penguins on January 1st. The uniforms are a kickback from the jerseys the organization wore from 1974 through 1995 before moving to then the MCI Center and getting a uniform make over.

“There is a great sense of history in playing hockey outdoors, and we wanted to pay tribute to our team’s history with this uniform,” general manager George McPhee said. “They turned out very well, got a terrific reaction from our fans and will look fantastic on New Year’s Day.”

The unveiling was apart of Caps Con, the second ever Capitals convention that invites fans a closer look into the team they love. Nearly 7,000 fans attended the event this year at the Washington Convention Center. Fans had a chance to meet their heroes as well as partake in forums and round table discussions.

The Caps will finish their preseason against Nashville tomorrow (Sunday) at 12:30 pm before opening their season on the road against Atlanta on October 8th.

Email ThisBlogThis!Share to TwitterShare to FacebookShare to Pinterest
I've thought of this before: Capitals Convention, Kolzig, Ovechkin