Caps Take A Beating Not Just By Habs

The Washington Capitals dropped game one in their series against the Montreal Canadiens. They took a bigger hit in the headlines: As seen above on the TSN.ca website with the headline that reads No-Vechkin. Kinda harsh, but a little bit true as Alex Ovechkin was held at bay in Game 1.

Then there is this one from Yahoo! Sports: 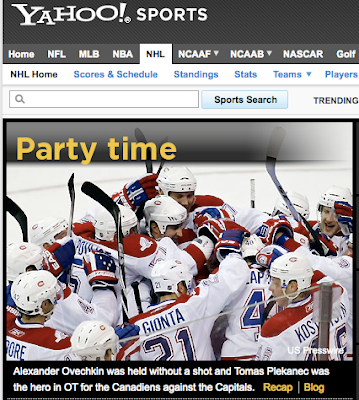 "Party Time." Really? It's not like Montreal won the series. It's game 1.

Or how about ESPN.com: 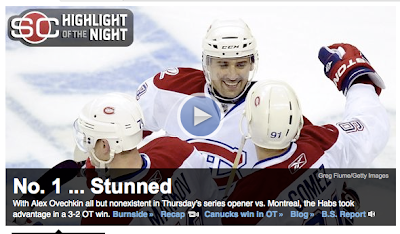 It's like the Capitals can't even move because they are so "Stunned."

"Canadiens beat Caps 3-2 in overtime" - Montreal Gazette ... with the first paragraph reading: "Anyone who wrote the Canadiens off in their first-round playoff series against the Washington Capitals is guilty of premature resignation."

Interesting Quotes of the night:

"He didn't play good. I can't put my finger on it right now, but when you get 50 shots on goal and Ovechkin doesn't get any, and you have four power plays, there's something... They took him away. But I didn't think he was very good." - Bruce Boudreau

"He did a good shot shooting against the grain. I was moving one way, and he went the other. He's a skilled player, and he was able to make that shot." - Jose Theodore on the game winning shot by Thomas Plakanec

"I don't think it's a surprise. There's a belief in this room that we can win this. We have a lot of respect for the team over there – and they’re going to come out hard on Saturday, but we like our group too." - Mike Cammalleri

"We were giving them so many chances and so many shots in the first period. In the second and third our guys started skating." - Jaroslav Halak, who stopped 18 of 19 shots in the opening 20 minutes.

“It’s not like we thought we would win it in four.” - Jose Theodore
Thought up by Garrett at 10:17 PM