NHL.com Gets An "A" For NHL Gamecenter

This is the third year I bought into the NHL Gamecenter Live online. It's the NHL's online version of Center Ice where you can watch games not in your market on your computer. It has been a process with this NHL service for the last couple of years, but this time they have got it right.

The viewing screen has grown to fill up a good size of your monitor and is in the HD format (when available). The picture is super clear with little or no hiccups, thus far. 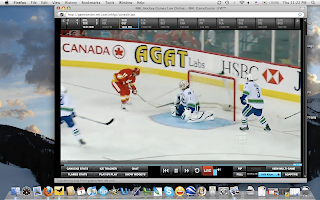 There is still real time stats as well as chat with other fans (although it is mostly trash talking). You still have access to archived games that track back to the '07/'08 season (when your are feeling nostalgic for a season or two ago). There is also a multiple game feature (up to 4 games) with the bigger screen space, which is much nicer than the multiple screen mode from last year where the feeds were much smaller. A sample below: 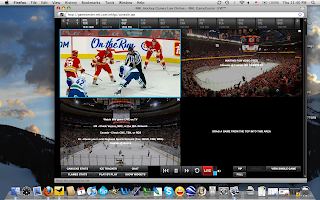 They have added a new DVR-like controls with a download where you can pause, rewind and replay the action. Also there is picture in picture (PIP) and real time scores to keep track of all the action.

I use to cringe every time my credit card was charged for the service, but this year it has been definitely worth the price tag ($159.00 USD). Games are still blacked out if they are on local television (like Versus, NBC, NHL Network, etc.). It's not a service if you just like your local team because they black it out every time. The window will slow a bit if you open more than 2 or 3 games at once. But, if you have high speed Internet, it is not so bad. If don't have high speed Internet, it will not work as well and you should not get it.

It might be worth a spin if you are a super NHL fan and love to watch out of market games from your computer and/or to keep track of your adopted Western/Eastern Conference team.
Thought up by Garrett at 11:22 PM

Email ThisBlogThis!Share to TwitterShare to FacebookShare to Pinterest
I've thought of this before: NHL, NHL.com

Thx, I'm also impressed, but I'm hoping one day the blackouts will be done with. I can't justify a tv plus hd box, cable/satellite, etc., for one sport that has months off.

WRONG!
nhl gamecenter is a complete fraud. Maybe they only show Capitals games. My team has been shown once out of 5 games.
Try calling support - no matter what option you choose, they keep you on hold for a few minutes and then hang up.
Don't throw away your money - don't subscribe.

Gamecenter live does not follow teams inside your market. I have not seen a single Caps game on it yet. But if the game is available on any channel like Versus, NHL Network, or another channel in your market (or in Canada, CBC, RDS), it will be blacked out (even if those channels are not available on your cable or satellite system). This is more of a system that only works to watch out of market teams.

GameCenter is good for watching your local team when you live in a different location. The issue is the Blackouts. I live Upstate NY by Buffalo. I have New Jersey, Buffalo NY Rangers NY Islander, VS and NHL Channel Blacked out. Every SAturday I have between 6 and 8 game Blackedout. It must be an issue of Selling Commercials, but they obviously know where I am connected at since they can Black me out......

The server is good, the quality is excellent 25Mbps\15Mbps. All games are in HD ( Very few in low res).

To NHL.com: Most of us buying your online server donot have cable...just a hint.

Sorry, but an 'A'? It deserves nothing more than a C.

Look no further than MLB.tv's service for a true 'A'. Not only can you watch almost every single game (both home and away feeds), you can watch it on your phone and on your TV, in true HD quality.

I have both and MLB.tv honestly blows NHL Gamecenter out of the water. I could rant more but I'll leave it at that.

Gamecenter is a scam. DON'T USE IT!
They rip you off for the next season automatically then won't let you cancel your subscription or get a refund without "speaking with a manager" who is always off-site and NEVER calls back. The only reason I got back the money they stole from me is because I called back 15 times and harassed them until they caved.

NHL.com gets an "F" as far as I am concerned. They collect their money and turn off every game I am interested in seeing. I can care less about the games in the WEST. I live in the EAST. They blacked out more games than they show. They will never get my business again. I will pass this bogus "deal" along to everyone I know especially on facebook. This is a crime. I wish I had the phone number to call these idiots who design black outs, aimed specifically for your area it seems. There are only a few posts season games on tonight and everyone is blacked out. They advertised that you can get post season games. What a bunch of garbage. You got me once....I'll get you thousands of times..I know a lot of people in the hockey world so enjoy your profits at my expense......it won't happen again. You should be building the sport up, instead of tearing it down with RIP offs like this. Don't get this. Get it on your tv instead.

They really need to get a clue. The ONLY reason for me to fork over cash esp $100+, is to get access to any and ALL games not on my local cable channels. Yeah, I MIGHT come off 100+ clams to roll the dice and get stuck with some dogmeat matchup I could care less about.

They really need to get a clue. The ONLY reason for me to fork over cash esp $100+, is to get access to any and ALL games not on my local cable channels. Yeah, I MIGHT come off 100+ clams to roll the dice and get stuck with some dogmeat matchup I could care less about.

I was so happy to be able to watch the games on NHL.com ONLY TO BE FOOLED after I bought the subscription. DO NOT BE FOOLED, THIS IS A COMPLETE SCAM. The guy told me that Detroit RedWings Games were owned by Fox Sports. Then why the heck are they played on Versus? Also Fox Sports is not only in Detroit, but all across the country. It aggravates me that they do not tell you that your game is blacked out until you subscribe...WHAT CRAP. I Advise everyone to tell everyone that this is a SCAM!!! I am not paying for this on my credit card and have already disputed the charges! NHL.COM = BUNCH OF THEIVING SCAVANGERS

Someone needs to come out with a website telling people NOT to subscribe to this folonious service. In a way it is FALSE ADVERTISEMENT! What do they want to you read 100 pages of fine print so they can tell you how they scam people into this? Riddiculous, I am so hot right now I wanted to punch the damn Arab from bangladesh on the phone right through back to his straw hut.

What a horrible 800 number to call too. The people sound like they have a damn 3rd grade education!

Gamecenter is only worthwhile if you travel a lot. If you don't, it's basically a scam or at least far overpriced and very misleading.

1) Any game shown on TV in your area will be blacked out. This is regardless whether it's a local team.

For example, if you live in Toronto and a Calgary-Vancouver (or even a San Jose-Dallas) game is on TSN or CBC or something, it'll be blocked out for you. Whether you have cable or not.

2) You cannot do it monthly. Despite that it implies that, you will pay the entire season price no matter what, you can just choose whether you PAY a lump sum or monthly.

3) Since all playoff games are broadcast nationally in Canada (TSN, CBC, etc), that means if you live in Canada you cannot view ANY playoff games on Gamecenter. Same goes if you're in the US and any game is shown nationally (ie NBC).

4) I don't know if it's been fixed, but as of the 2008-09 season, you could view a single game in full screen, but could not view the 4-game view in full screen, meaning the views were almost uselessly small.

NHL GAMECENTER IS A SCAM!

You cannot unsubscribe after 5 days. You're locked in at $20 a month for OUT OF MARKET GAMES.
They will then renew your subscription without informing you and again allow you no cancellation.

DO NOT SIGN UP FOR THIS USELESS, EXPENSIVE "SERVICE".

I cancelled, by phone, within 3 days, but they conveniently lost the record of that transaction. When I discovered the charges on my credit card, I called back and they told me that I had to cancel within 5 days. I wanted to scream.

I have watched exactly zero minutes of hockey for 170 dollars.