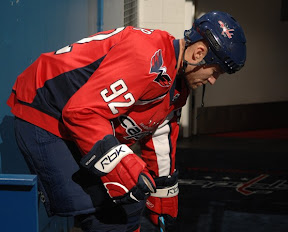 You might not be able to teach an old dog new tricks, but Micheal Nylander clearly needs to change his game if he wants to gain favor and playing time from Caps bench boss Bruce Boudreau. Nylander opened up this summer to a Swedish newspaper saying that Boudreau didn't think the forward was "good enough." I don't think anyone doubts Nylander's skills as a player or think he is not good enough for the NHL, but there are somethings he can improve on or get rid of to play the kind of hockey his coach likes to play.

The following is three things Nylander can improve or drop to be a better player in this system. Let me preface this by saying that I am not Bruce Boudreau. These changes are what I have observed watching him play in the new system under Boudreau. In particular is a game early in Boudreau's reign against Florida. That was when Nylander was still a first and or second line center.

Change #1: Stop calling for the puck. I had a coach once tell me that there really is no need to slap your stick to call for the puck if you are in the right position. If you are were you are supposed to be, your linemates will find you. Nylander developed the bad habit somewhere and listening to his stick pounding on the ice is a bit like listening to Morse code. Dit-dit-dit-da-dit translated to "I need more ice time."

No matter where he was on the ice, he was calling for the puck. In Florida, the camera would nestle in on the play, but in the back ground, off screen, one could here the tap-tap-tap of his stick. Instead, Nylander should be jockeying for a position; working as hard off the puck as well much as he is on it.

Change #2: Cough up the puck. This is a two parter. One, Nylander has to head-man the puck. In the game against Florida in December of '08, he had Alex Giroux open in the middle to enter the zone. For some inexplicable reason, Nylander turned and skated back into the neutral zone. What's more astounding than the reset was if he had head manned the puck, Giroux had a breaking winger with him that could have resulted in a two on one inside the zone. Instead, the play was broken up when the Panthers were able to regroup and thwart the play.

Two, Nylander spends way too much time with the puck to begin with. A good skill to have, but he doesn't seem to head to the net or make an aggressive move with it once he has it. In some ways the skill is great to have on the powerplay, but is tough to swallow at even strength. He would clearly miss open players, fail to develop plays or odd man rushes, as well as a plethora of other problems for hanging on to the puck a moment too long.

Change #3: Be more aggressive. Nylander has to be more physical in the offensive zone. Instead of going for the hit, he would try to stick check allowing the player to slip past him. He has to stand up his player and get more physical, much the way Boudreau would like to see all his forwards play. We are not asking Nylander to be like Alex Ovechkin and destroy the other man. Rather, he needs to stand up his man and put pressure on the opposition's defensemen.

Maybe with these glitches fixed, Nylander could once again be an important part of the Capitals' line up. A trade to Edmonton may not be a bad deal either.

Email ThisBlogThis!Share to TwitterShare to FacebookShare to Pinterest
I've thought of this before: Boudreau, Jurcina, Nylander, Ovechkin, Varlamov

4. Don't pull up and pass backward on a breakaway.

Change your jersey number to 29 - on your new team.

He is great at playing puck keep away. Kind of like my 6 year old on Xbox. I can play him the whole game and all he does is skate in circles with the puck and get nothing else done. I'm ready for him to go. I'm okay with that.