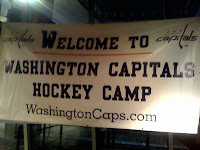 Sorry for the late post, I had engagements this evening.

Group A didn't just win the game by dominating almost the entire game, but also by scoring seven straight goals in the third period. Dustin Carlson's nightmare as the blue team's goaltender. It capped a great scrimmage for the boys in the white Capitals' practice jerseys in the second of three scrimmages schedule for the week as they win it 8 - 3.

Group A had three dominating lines, the Backman/Glass/Bruess line (or the BBG line), the Perreault/Mitchell/Sheen line, and the Dubuc/DiSimone/Broda line. Each one of the lines scored at least two goals. Michael Dubuc now has 5 goals in this summer's camp, while Mathieu Perreault scored a pair today. The BBG line was a great grinding line that kept the blue side frustrated and making bad mistakes.

The overall play was a bit sloppy, a sign that the week is wearing long with some of the prospects. Bad passes, misplays with the puck were the norm. If it were not for Garrett Zemlak putting forth a tremendous effort for the Blue team in the first half of the game, the white score could have easily reached 10 or 12 goals. But Zemlak kept his team in it, as he posted a shut out in the 30 minutes he played.

Dmitri Orlov has been having a great development camp. In his scouting report they call him an "opportunistic hitter" and he did find a couple of opportunities to pull out his hip check. He has the speed to make up for mistakes, he knows when to pinch in and when to back off. Very rarely was he ever out of position. Toward the end though, the Group B just couldn't over come the skill and speed of Group A and Orlov was not completely immune from being taken advantage of. Perreault pick-pocketed Orlov for his second goal of the day and that was the dagger in the heart of any comeback for the blue team.

Speaking of blue team players that impressed, Cody Eakin also did well. His speed factored in two goals for the blue team. One an assist, the other a goal. John Carlson also helped the blue team's cause with a couple of good clears and some great passes. He has yet to have a chance to open up and use that cannon of his.

There was a scary moment in the scrimmage when Jake Hauswirth crashed the net with Anton Gustafsson. The pair of them went into the net hard and Lil' Gus got the worst of the goal post. He cut his forehead really bad and he was stunned and on the ice bleeding as trainers came to the rescue. Hauswirth and Zach Miskovic (who also was in the collision) looked to be a bit shaken but okay. Braden Holtby, the white team's goaltender, was hardly hit at all as the players dove to miss him. Gustafsson did not return.

Injuries weren't uncommon on the fourth day of Development Camp. Patrick Wey caught a puck in the mouth, required stitches. Stefan Della Rovere had to sit out due to a sprained shoulder (he also had stitches on his upper lip). Joe Finley took a stick up high and got cut on his lower lip. It is a sign that every player is playing as hard as they can to impress the Caps' management.

Finley has been slowly improving through the course of the camp. On day one, he seemed to want to hit everything in sight, often slipping out of position to do it. In scrimmage two, he played a better positional game, letting the hits come to him. He also tightened up his discipline after getting whistled for two penalties in scrimmage one.

I would not be surprised if the coaches decide to mix up some of the players between Groups A and B. Group A just was too much for in the second scrimmage. The only answer the blue team seemed to have was being more physical and pray their goaltender can help them out.

Saturday's scrimmage should be a good one in either case.