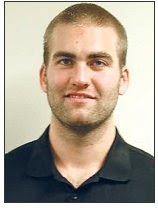 Joe Finley was arrested and cited for disorderly conduct. According to the Grand Forks Herald:

Joe Finley, 22, and Matt Frattin, 21, are both charged with disorderly conduct. In addition, Frattin faces a fleeing charge and Finley faces a charge of giving false information to officers. All the charges are misdemeanors.

Finley and a UND team mate were throwing objects out of a Grand Forks home. It was their home, but the broken glass and items were thrown into the street as a result of their aggression. Both started to run when police arrived but Finley stopped, Frattin did not.

Finley offered a credit card with a different name on it as identification but finally told the officers his real name when he was taken to the station.

Finley was a first round draft pick of the Capitals in the '05 NHL Entry Draft.

The news was broken in the DC area by the Times blog, In The Room.
Thought up by Garrett at 7:16 AM

Email ThisBlogThis!Share to TwitterShare to FacebookShare to Pinterest
I've thought of this before: Development Camp, Finley