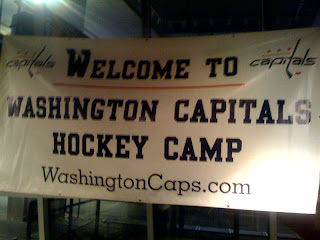 The Capitals start their development camp on Monday (July 13th), with a slew of players making the trip to Washington over the weekend. Today the Caps have released the roster of players that will be attending. There are a few familiar faces and a couple '09 draft picks that will make their first appearance in Arlington.

Among those we will be seeing for the first time up close is Anton Gustaffson. The 6'2", 194 lbs. centerman is the offspring of one Bengt Gustaffson, a former Capital great. Whether that adds to the pressure of of Anton making the team and doing will remains to be seen. He missed last year's camp with a back injury.

Also of those we will be seeing for the first time will be '09 draft picks Brett Flemming, Cody Eakin, Benjamin Casavant, Garrett Mitchell, Patrick Wey, and Dmitri Orlov. Orlov was a surprise pick for the Capitals, as he was slated to be taken in the first round, but was passed over. The Caps snatched him up in the second round. The only '09 draft pick whose name is off the list is first round pick Marcus Johansson. This was probably expected since Johansson is still under contract for another year with his Swedish elite team.

Of the returning players, we will get another look at Jake Hauswirth, John Carlson, Francois Bouchard, Stefan Della Rovere, Dmitry Kugreyshev, and goaltender prospect Braden Holtby. A complete list is available on the Capitals' website as well as the schedule of on-ice activities for the youngsters.

Also yesterday, the Capitals took a page from the Chicago Blackhawks notebook and have scheduled a Capitals Convention at the National Harbor. This gives fans an opportunity to meet players, ask questions of the coaches and management and so much more. This is an amazing opportunity for fans to get a up close and personal view of their favorite team. The convention will be held on Saturday Sept. 26.
Thought up by Garrett at 10:42 AM

Email ThisBlogThis!Share to TwitterShare to FacebookShare to Pinterest
I've thought of this before: Capitals Convention, Development Camp