Awards For The NHL Awards Show

Alex Ovechkin took the Hart Trophy again, he repeats as the league's most valuable player. He snubbed his countrymen Pavel Datsyuk and Evgeni Malkin to win the award once again. Ovi also won the Lester B. Pearson Award for MVP decided on by the players and the Rocket Richard Trophy for most goals in the '08 - '09 season. 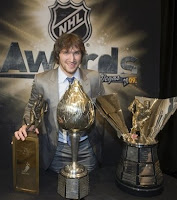 You know all the winners (if you don't, you can find them all on NHL.com). Now here are the awards I will be giving out for the awards show. 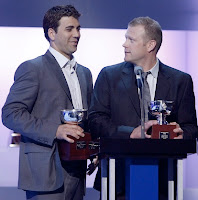 The Tear Jerker award: Tim Thomas when he was awarded the Vezina Trophy. "I have been more worried about getting my name on a roster than I have been about winning the Vezina." Aww, doesn't it break your heart.

The Classiest award: Jean Beliveau and his acceptance speech for the '09 lifetime achievement award. He attributed all of his successes in life to his family especially his wife. Classy.

The Funniest Moment award: Tim Thomas after he and his teammate Manny Fernadez won the William M. Jennings Trophy. Thomas spoke first thanking the usual people as well as his wife. Then he turned to Fernadez and said, "Do you want me to thank your wife Manny?" It got a good laugh and Thomas turned bright red. Proving goaltenders share everything (no, not really). 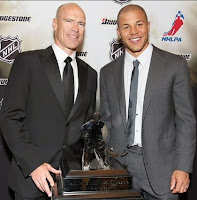 The "I Look Exactly Like the Presenter" award: Jerome Iginla as he accepted the Bridgestone Messier Leadership Award. Both Mark Messier and Iginla were sporting the shaved head look. Check out those shiny domes.

The Awkward Moment Next to a Beautiful Girl award: Presenter Kirk Muller when he as presenting the award for the Selke (best two way forward). Tricia Helfer joined him and spoke first. Muller was a wreck next to the super model. He stumbled on his words and only Helfer's good looks and smooth talk saved the day. Hey, I would have been stumbling over my words too with this beautiful girl next to me. 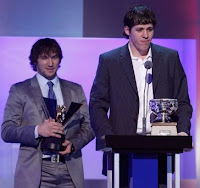 The Best Attempt At English But Fell Short award: Evgeni Malkin with Pavel Datsyuk as runner up. Malkin spoke broken English when he accepted his Art Ross Trophy. "I would like to thank the organization and stuff," Malkin sputtered. "Of course I want to thank my parents, they support me on my lap(? - hey that is what I heard). Thank you very much." Ovi chimed in after his speech, "Well Geno, your English is better than Pavel Datsyuk English." A Russian riot ensued there after (no, not really).

The Random Thank You Speech award: Alex Ovechkin for thanking his equipment manager when he accepted the Rocket Richard Trophy. Brock Myles, the Capitals' equipment manager was the source of Ovi's praise. "We forget to say thanks to our guys that work in the team like trainers. Just normal guys who help us," Ovi said. "So I want to give this award to the Capitals organization, Washington fans and our trainers." Sweet.

The Snub Handshakes and Award Shows award: Sidney Crosby, whose name and picture (besides the opening) were never seen. Was he even there? 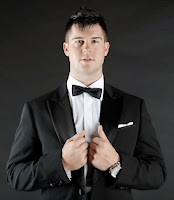 The "I Wore What I Wore to Prom" award: Mike Green in a simple tux with bow tie. Just about everyone else showed up in a suit. I think the NHL should have made this a black tie event. Green looked sweet.

The Inspirational Moment of the Night award: Vladimir Kostantinov who walked out on stage with a walker. Amazing moment and why no one gave that man a standing ovation, I will never know. He was a presenter and walked out with good friend Igor Larionov to present the Pearson award. Although Konstantinov looked like a dejected old grouchy man (which kind of made him look endearing), it was amazing to see him on his own two feet as the last time I saw him he was in a wheel chair.

The "What the Heck Do We Do Now" award: Everyone after the show ended. Ovechkin just took the Hart Trophy backstage and the Micheal Buble concluded the show, the entire crowd just sat and looked around wondering what the in the world was going on. I am sure they would have sat there all night if producers hadn't got everyone out of the theater. I mean you are in Vegas people, look somewhat excited to be there.

Congratulations to all the real winners of the real awards. That officially concludes the '08 -'09 season. Ovechkin ended the night on a positive note for Caps fans, "Next year, I hope Stanley Cup will be ours."