Moose and Bears Are Set For Finals

Waiting for the Capitals franchise to turn this: 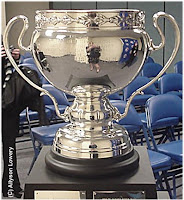 For the first time in nearly ten years in the AHL, the number one teams from their respective conferences end up in the finals. The Bears and Moose have both finished the regular season atop of their Conferences and now will battle it out for the Calder Cup. The Moose lead the league in defense with only 188 goals against, while Hershey lead the league in scoring with 296. The contrast for these two teams should make for an interesting series.

While it is only the first ever Finals appearance by Manitoba, Hershey will compete for the 21st time in AHL's history and will be looking for their tenth championship. Hershey won the Calder Cup in '06 and was runner up in '07. Their appearance in the finals for a third time in four seasons is the first in the AHL since Rochester did it in the early nineties.

The series that starts tonight, the same night the Stanley Cup finals start. Micheal Neuvirth will be the starting goaltender for the Bears. He has been brilliant thus far in the post season with a 2.03 goals against average and a .929 save percentage. His counterpart is Cory Schneider for the Moose, he has posted similar numbers in the post season with the same 2.03 GAA and a .924 save percentage.

The Bears have only four returning players that were on the team that won the Calder Cup in 2006, Graham Mink, Chris Bourque, Tyler Sloan and Dean Arsene. Bryan Helmer won the Calder Cup as a second year pro with the Albany River Rats in 1995. He also skated for the Manitoba Moose from 2001 to 2003 and ranks seventh all time in career AHL playoff games played with 111.

"This is the Super Bowl to them," Voice of the Bears John Walton said on his blog. "We had more media requests this morning from Manitoba than Hershey, and we hold our own pretty well here when it comes to media coverage. I was told yesterday that one of the local papers up there is planning a 20-PAGE pullout section Saturday to mark the opening of the Finals. What NHL team heading into the Stanley Cup Final outside of Toronto or Montreal would ever get something like that?"

John Walton also has pictures up on his blog from Manitoba on the Bears excursion thus far.
Thought up by Garrett at 9:52 AM

Email ThisBlogThis!Share to TwitterShare to FacebookShare to Pinterest
I've thought of this before: Calder Cup, Helmer, Hershey Bears, Neuvirth, Sloan