A little bird told me that not only is the NHL Schedule complete, but they are set to release it Wednesday a day after the MLB All Star game during a relative lull in sports news. While I don't have the details on what the Caps will be doing, several other teams have sort of leaked their home openers.

The Tampa Bay Lightning are the league's biggest news makers this off season. Why not top it off with a Ovechkin-like keep? Vinny Lecavalier signed an 11 year, $85 million contract that will keep him in Tampa until just shy of his 40th birthday. Actually I think it's a good signing for the Bolts and for Lecavalier. The contract is front heavy so later, if they need to bring in more talent they can do so.

Apparently that has Atlanta a little green with signing envy. They went out and signed free agent Jason Williams from the Chicago Blackhawks for 1 year, $2.2 million. Atlanta has the most work to do in the division as far as getting their fans back in the Blueland fold. Their new coach, John Anderson, best buddies with one Bruce Boudreau, seems to be helping in that regard.

Since development camp, there has been some buzz about Jake Hauswirth, a camp invitee that seemed to make quite the impression. So I did a little digging.

Slated to attend Michigan Tech, the Wisconsin native scored in each of the scrimmages at Kettler last week. And in certain circles amongst those that talk hockey in Wisconsin, they are saying that Hauswirth is the real deal. He played 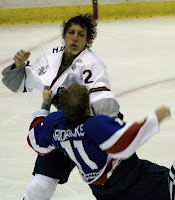 57 games with the Omaha Lancers last year, scoring 13 goals and 23 points and played 13 playoff games, amassing 2 goals and 4 assists. While in development camp his play was impressive his numbers from the Lancers were middle of the road. Before Omaha, Hauswirth played for the Marquette Rangers (pictured left) for their inagural season. There he finished third on the team in scoring with 21 goals. Hauswirth will be a 21 year old freshman at Mich Tech come the fall, where his father attended college.

And finally, the Caps make it official (he must have signed the paperwork). Sergei Fedorov has been inked to a one year contract. GMGM's thoughts in the Caps press release:

“We are happy to have Sergei back,” said vice president and general manager George McPhee. “What he brings to the club extends beyond the rink. He is a leader and a player that everyone on our team wanted back. We look forward to him helping us compete this upcoming season.”

Email ThisBlogThis!Share to TwitterShare to FacebookShare to Pinterest
I've thought of this before: Development Camp, Fedorov, Lightning, NHL, Thrashers