Just a few thoughts I would shoot out there after attending the morning group at Kettler. 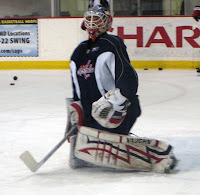 Michal Neuvirth (pictured) has definitely matured over the past year. Last year in camp he looked small and a bit lost at times. This morning he looks a little more filled out and more comfortable in net. At first I thought he was Simeon Varlomov but was quickly corrected. Wearing Brett Johnson's old mask, Neuvirth calmly turned away some good shots and had a few eyebrow raising glove saves. His boyish face now has some scruff on it and he looks much older and bigger than he did this time last year.

Andrew Glass's skates have to be a good 10, maybe 15, years old. I played with the exact same Bauers when I was playing back in High School. Seems like a new pair of skates would make him go faster since the newer skates are much lighter.

Sasha Pokulok had two really good hits during a 5 on 5 drill. Karl Alzner tended to shy away from hits. And the final skating drill seemed to hurt at least one player and left all a bit out of breath. Bruce Boudreau just seeing how in shape they all were. Some looked a bit too winded.

Mathieu Perreault scored two pretty goals, one on the back hand that sailed over Neuvirth's shoulder. Perreault is a sneaky forward and hangs around the net alot, at least he did a lot of that on the 5 on none and 5 on 5 drills. Perreault also was one of those that was pretty winded during the last drill.

I did not stick around to see the afternoon group, but I will be there to see them tomorrow morning. Dan Dunn spent most of the time in the opposite net from where I was standing, but he looked a bit nervous at first. He let in a couple of softies, until there was a 5 on none drill that Dunn kept the puck out for a good minute or so. 5 guys couldn't get it past him.
Thought up by Garrett at 12:42 PM

Email ThisBlogThis!Share to TwitterShare to FacebookShare to Pinterest
I've thought of this before: Alzner, Development Camp, Neuvirth, Perreault