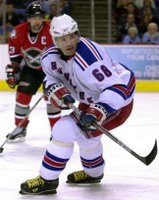 Is it any wonder that Jaromir Jagr is now a superstar scorer after the NHL cracked down on hooking and holding? Not Really. Jagr has always had the potential to be a great goal scorer and produce goals on a consistent basis. In 46 games with the Capitals during the '03-'04 season, before being traded to New York, Jagr accumulated a mere 16 goals. This season, in 13 games, he has already managed 12.

Jagr is an elite European player, which means when it comes to playing in the North American style (i.e. smaller rinks, hooking, holding), Jagr would get frustrated. Watching him play in D.C., Jagr would be hooked and held extensively in the first half of the game. Then he just gave up. Spending the rest of the game along the boards and dumping the puck.

In Pittsburgh, Jagr could depend on Mario Lemieux to give him the space needed to play well. It was the support he needed in Washington, someone to take the sticks so Jagr had room to create. However, for the Capitals, Jagr was the one that had to take the sticks, and that role didn't fit well with him there.

Now that the North American style of play has been laid aside, Jagr is finding new life, and space, to score goals. Helping the Rangers to take 3rd in the Eastern Conference standings. A surprise since many thought the Rangers were to be the worst team in the league.

Many players that have played well in the league before almost look like a fish out of water. Players that had the ability to create with a stick in their belly, now look like they almost don't know what to do with the puck when it lands on their sticks. John Leclair is one of those players that would grind it out in front of the net and get garbage goals. Now his muscle has to be used for something else.

Players like Leclair, or Mark Recchi will soon start to adapt. They are great players that know the game of hockey, it will just take time. Jagr on the other hand made the transition rather quickly, and the Rangers are benefiting.

Email ThisBlogThis!Share to TwitterShare to FacebookShare to Pinterest
I've thought of this before: Jagr, NHL, Notes